I started The Packafoma Post primarily as a video production blog, but sometimes my obsession with aviation sneaks in as well. 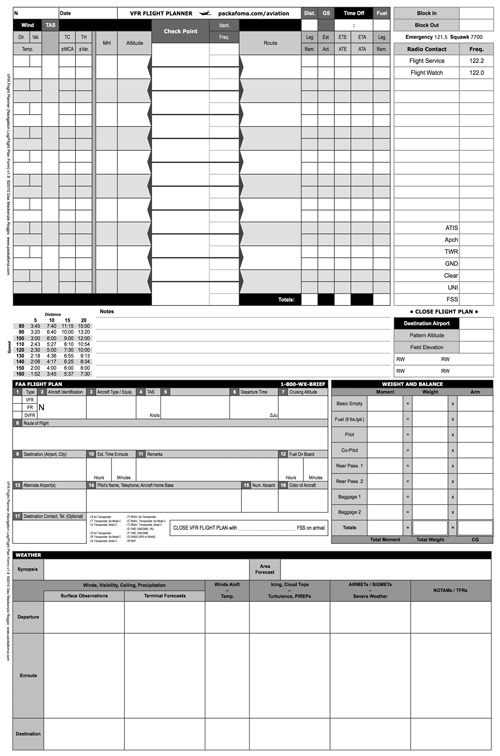 As a student pilot, I relied on the Jeppesen flight planning sheets that I found stacked next to the photocopier at my Santa Monica flight school. They were free and adequate.

I am extremely picky when it comes to flight preparation, however, and as I learned more, I became less satisfied with the forms. They made very poor use of space and lacked an area for radio frequencies or runway information. I tried some alternatives from ASA and Dauntless, but I disliked them even more. The well-advertised offering from Dauntless deserves credit for ingenuity, but I’m pretty sure if I ever actually used their origami style of flight planner, I would end up performing some unintentional aerobatics.

Keep in mind that I am someone who went through five flight bags in my first few months of training before I found one that I liked, and that was after making a lot of special modifications myself. The same remains true for pretty much everything from flashlights to kneeboards to sunglasses, all of which take on more gravity — pardon the pun — when you start flying.

So not long after I got my private pilot certificate, I decided to create my own flight planning form. I kept it as simple as possible but spent many hours fine-tuning every inch. I have been using it ever since. It was worth the time just for my own use, but I think a lot of pilots will find that it’s an improvement over the commonly available flight planners.

I’m a tech geek, and I appreciate that a lot of pilots are using electronic flight planning methods these days. An iPad is a great addition to any flight bag, but I still prefer to plan most flights with a pencil and paper. I feel like this forces me to learn the route as I create it, which is why I found it particularly helpful as a student pilot.