The CS6 version of Adobe Premiere Pro went a long way towards winning me over after Apple stranded the FCP7 community with the release of FCPX. I still have many, many gripes, including stability concerns in the Mac version, but I believe Premiere is close to being a product I can fully recommend. So it is a shame that it is still missing an important feature: background rendering.

Adobe has announced that the next version of Premiere will be Adobe Premiere Pro CC. The switch to the Creative Cloud subscription model has caused immediate controversy, but personally I think it’s a reasonably good deal IF they keep making significant improvements to their products. I would say that the majority of Adobe’s apps are in desperate need of an overhaul.

Regardless of the Creative Cloud controversy, however, this next version of Premiere Pro looks like a solid upgrade. Adobe has started to put a dent in my Premiere Pro wish list.

HOWEVER, despite all the new features, Adobe Premiere Pro CC still does not offer any form of background rendering!

On the positive side, Adobe did make a very important upgrade to smart rendering in CC. Smart rendering and the “use preview files” export option now work with Apple ProRes. This is huge for those of us who are accustomed to the Final Cut Pro 7 workflow.

Yet, by adding ProRes smart rendering, Adobe is acknowledging that rendering as you work is a legitimate Premiere workflow. Of course it is, because it can save substantial time when exporting. Despite faster hardware (or even because of faster hardware, as I explain below), background rendering is more crucial than ever.

Also, Avid has announced that Media Composer 7 will have background processing. Adobe needs to keep up.

For a detailed look at some major benefits of background rendering, read on… 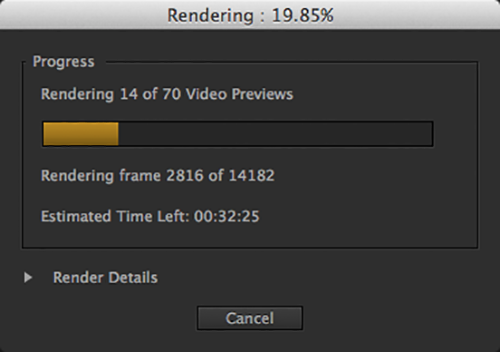 Background rendering could significantly
speed up editing and exporting.

Adobe ambitiously envisions an NLE into which you can dump any format, edit with real time effects previews, and quickly export directly to your delivery format of choice. It’s a worthy goal.

They have made impressive strides in the first area. Being able to skip transcoding and go right to editing is a wondrous thing.

They have achieved mixed results in the next area. Clips with effects still require rendering to scrub smoothly and sometimes just to play, particularly at full resolution. Multicam is particularly an issue, even with the latest hardware and a supported GPU, and the most common Mac GPUs are not supported at all.

The last part — exporting — is the real problem.

In Final Cut Pro 7 — or with background rendering activated in Final Cut Pro X — exporting to ProRes is extremely fast. This is because FCP does not need to re-encode the video. It takes the previously generated ProRes render files and stitches them together with no generational loss. This is sometimes referred to as smart rendering. In Premiere Pro, it doesn’t matter if you’ve already rendered out the entire sequence to ProRes and are exporting to ProRes. It re-encodes the whole thing every time.

If you need to adjust even a single frame of your sequence, you will then need to re-export the entire sequence, no matter what format you choose. For longform projects, this is a major drawback of Premiere Pro.

You can opt to “Use Preview Files” on export, but this is not what FCP switchers might think it is. Media Encoder still re-encodes every frame even if this is checked in almost all instances. It simply uses the previously encoded render files to assist with the processing. There is a generational loss from those preview files, and the speed improvements are marginal.

“Smart rendering” does already exist in Premiere CS6 for a small number of codecs, such as DV and DVCPro, but not for ProRes (or DNxHD). A smarter system would indicate when the smart rendering capabilities of “Use Preview Files” are enabled (rarely) and when they are not.

Update: As I added above, Adobe has announced that Adobe Premiere Pro CC will support smart rendering of ProRes and DNxHD. That’s awesome! But it’s half the battle. Now that Premiere can use pre-rendered ProRes and DNxHD preview files to speed up the export process, it’s time to allow that rendering process to take place in the background as it does in FCPX and the upcoming Avid Media Composer 7. At the very least, an idle time auto-render setting would be a simple and useful feature.

At a basic level, background rendering would allow many Premiere Pro users to work with fewer interruptions. Maybe that’s the down side! In my experience, adjusting clips that have effects applied to them, even simple color corrections, means that I have to wait…and wait…for preview files to render before I can audition a new cut. In the mean time, I am blocked from doing anything else in the application. (If more Mac GPUs were supported, this might be less frustrating.)

Until I can preview any sequence full-screen at full-res with multiple effects, rendering will be part of my workflow, and therefore background rendering would be beneficial.

I don’t mind dropping the playback to low resolution temporarily as my footage renders, but I shouldn’t have to export a sequence to preview it at full res.

Quality hardware is an important investment, but requiring everyone to work on pimped-out towers at all times is not the answer. Sometimes, the available hardware is not your call, and there are many jobs where being able to cut on a laptop is crucial. I have found this to be the case with large corporate events where work areas are often set up quickly, sometimes in tight corridors, and subject to change. There are many other forms of production where mobility is even more important.

Also, with each bump in processor power comes a new, more demanding codec. 4K is here, and Adobe’s solution for editing raw is to use a proxy format. What? This completely upends their no intermediate codec philosophy.

If Premiere Pro allowed you to set the preview file format to the export format of your choice, encode as you go via background rendering, and export using a true “Use Preview Files” option, it would save substantial amount of time in the export process, especially when it comes to re-exporting after making adjustments to the sequence.

As one commenter put it in a Creative Cow thread on smart rendering in Premiere, “Being able to render as you go does save a bunch of time when last minute revisions pop up.” For long sequences, the benefit is enormous.

When I first floated my thoughts on Premiere Pro and background rendering in the Adobe forums, it was met with some resistance from long-time Adobe Premiere Pro users. (No, I didn’t realize such a thing existed either.) Many of them just seemed concerned that Mac OS users were taking over the ship, but I agreed with one point, which was that it should be possible to turn background rendering off. I would suggest making three different options available in the preferences. Rendering should start: automatically (instantly), only through manual initiation, or during idle periods. It should also be possible to batch render sequences in bins.

The increasing popularity and affordability of RAW workflows has added a new and exciting wrinkle to this discussion. You know what I’m talking about: the Blackmagic Cinema Camera and its use of the CinemaDNG file format.

Adobe discontinued native support for CinemaDNG in Premiere just a few months ago. Ironically, it was Adobe who developed the open-source RAW format in the first place. It seems they weren’t satisfied with the real-time performance in Premiere. I have no doubt that their concerns were legitimate (5 MBs per frame of RAW camera data…geez), but it’s just another argument for more powerful rendering options.

If Premiere supported background rendering, they could offer full native support for CinemaDNG. Systems that don’t have the processing power to handle it, which might be the majority of them at this time, would have a fall-back that doesn’t require a workaround such as converting the footage to lossless using After Effects.

Instead, Adobe is choosing a stubborn, idealogical commitment to native-only editing over compatibility with an important format.

Even for non-RAW workflows, conforming to a high-quality codec via background rendering has the potential to make it easier to get sequences out of Premiere and into third party software such as DaVinci Resolve.

To be fair, Adobe was apparently caught off guard by the sudden emergence of the BMCC and Blackmagic’s choice to rely on CinemaDNG (per Kevin Monahan). This gives me hope that they will reconsider their stance against proxy formats and introduce more advanced rendering options.

At the very least, a built-in proxy format system would be advantageous. If we’re going to be forced to transcode our source footage anyway prior to editing, Adobe’s aversion to intermediate codecs doesn’t really make sense.

Update: Adobe has added native support for CinemaDNG in Premiere Pro CC 7.1! That’s awesome (if you have a new Mac Pro that can handle it). They also added improved capabilities for relinking from proxy media back to full resolution. That’s also awesome, although I would still prefer to work with the original footage and background render preview files for smooth playback. Once again, if you have to transcode, native support doesn’t really mean anything.

Media Encoder can already encode in the background by creating a temporary copy of your project file. Imagine if it could go to work on active sequences, as you continue to work, and render into multiple file formats. In most cases, I would set it to ProRes for my master and a flavor of H.264 for web delivery, choosing ProRes as the preview format as well. I dream of completing a project in Premiere and then…well…that’s it. It’s already encoded. Just export at the “speed of save.” Then start your uploads and catch up on some much needed sleep.

If this seems like it would be beyond the power of most systems, FCPX handles a single stream of background rendering fairly smoothly even on somewhat older Macs. If your computer can encode one sequence quietly in the background, then it should be able to handle two or more, perhaps prioritizing the preview format.

Adobe Premiere Pro needs background rendering to allow editors to work more quickly and effortlessly from start to finish, and it’s time for Adobe to bite the bullet and accept that there are benefits to a high-quality intermediate codec that can take advantage of smart rendering. If ProRes or DNxHD present licensing problems, Adobe should develop their own standard.

Adobe, this is your chance! By including smart background rendering (in addition to a mere 88 feature requests), you have the power to make us forget that we ever pined for FCP8. We’re counting on Premiere Pro CS6.5 or CS7 to come through before we’re forced take another serious look at FCPX!