Blackmagic Design’s DaVinci Resolve 14 is what FCP 9 should have been…and FCP X never will be. 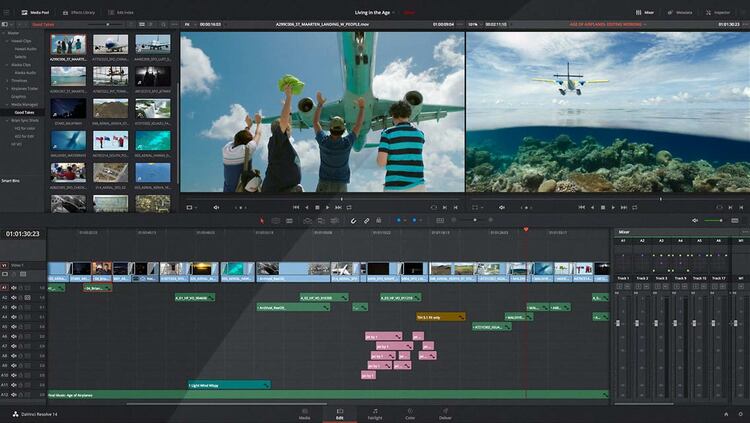 DaVinci Resolve 14 Now Available for Download (That’s not an affiliate link. I just think you’ll really like it.)

In an alternate timeline, no pun intended, Final Cut Pro 8 was a brilliant upgrade to Apple’s storied non-linear editor. FCP 8 introduced cutting edge innovations, 64-bit performance, and Apple’s trademark interface refinements without sacrificing existing features or compatibility with FCP 7. Six years later, with Avid in bankruptcy, Apple built on the runaway success of FCP 8 with FCP 9, an app so flawless that its users ascended to a higher plane of existence, their cinematic visions inspiring peaceful resolutions to all the violent conflicts on Earth.

But here in this universe, Apple released Final Cut Pro X, and I switched to Adobe Premiere Pro.

After a brief honeymoon period, I spilled a whole lot of digital ink bitching about how much Premiere Pro sucks. I suppose I should have seen it coming. Adobe was responsible for the Flash epidemic, after all, a virus which took decades to eradicate.

It all began with the untimely death of Final Cut Pro 7. Adobe took direct aim at the pro editors whom Apple had seemingly abandoned with the initial release of Final Cut Pro X. The next version of Premiere Pro, version CS6, was an overhaul to their long-neglected NLE that showed real promise. It was all downhill from there.

Soon the Creative Suite evaporated into the Creative Cloud, a transition I could have lived with had the costly subscription model brought the rapid improvements that Adobe promised. Instead, they just kept introducing new mobile apps that no pro editor would ever touch, while core features of Premiere CC remained buggy and unrefined.

And so today I am proud to say that I have been Creative Cloud-free for 9 months! Yes, thank you. I’ve just been taking it one day at a time…Actually, it’s been easy.

I had been doing some editing with DaVinci Resolve since version 12.0, and using its color correction capabilities since long before that. Soon after the release of version 12.5, Resolve became my primary piece of editing software. I dumped Premiere and Creative Cloud and haven’t missed that bloatware for a second. And now, with an upgrade so major they skipped a version, DaVinci Resolve 14 leap frogs the “big 3” as a top tier NLE, a full-fledged DAW, and the industry standard color correction system. It’s also free (what?), truly cross-platform (MacOS, Windows, Linux) and goddamned pretty. Blackmagic’s attention to detail and performance is precisely what Adobe lacks. Apple has the design chops, but let’s face it, they tend to get a little distracted digging out from under all the cash piling up as their iPhones fly off the shelves.

I could spend as much time listing all the reasons I love Resolve as I spent detailing the bafflingly entrenched flaws of Premiere, but I don’t need to, because what could be more convincing than Blackmagic’s ravishing website: Blackmagic Design DaVinci Resolve.

But if I had to pick, these are a few of my fa-vor-ite things:

So is there anything I don’t like about DaVinci Resolve? Of course. I’m a bit picky and no app is perfect. Resolve lacks the frame rate flexibility of Premiere and Final Cut. Once media has been added to a timeline in Resolve, you’re stuck with whatever frame rate you have set, even for new timelines. The only way to change the frame rate is to create a new project.

And is there anything I love about Premiere Pro CC? One thing: the grave accent key (tilde). If you ever edit on a laptop, you feel me.

What about Final Cut Pro X 10.3? Meh. As an unrepentant Apple fanboy, I want to like it, despite the redundant, idiotic version sequencing that resulted from Apple’s fondness of the Roman numeral X. So I’ve given it another chance every time a new point update has come out — or are they major releases? It’s unclear. But even with its many improvements, FCP X 10.3 retains the consumer-focused core and feel of iMovie. Libraries? Events? Projects that aren’t projects? C’mon. But hey, plenty of legit pros love it, with a passion. Let us hope that Apple doesn’t break their hearts, again.

Avid? Gross! Once upon a time I was a young, strikingly handsome, occasionally sober, online editor living in Los Angeles, grinding away on “The Avid.” I miss those days. I sure as hell don’t miss Avid. Avid Technology wouldn’t know good UI design if someone cut together a how-to video and sat it on their face…or…something. The studio drones who are locked into ancient workflows won’t move on until they have no choice, but Media Composer isn’t even in the conversation for the next generation of editors, nor the current generation, if they have any sense.

I can’t explain why Premiere still performs like beta software after years and years and years of updates, or why Creative Cloud has to piss all over every single directory in my file system and hog resources with pernicious daemons. But don’t you worry about Adobe. That ’scription money will keep rolling in, mostly because After Effects is still hard to replace and every once in a while some asshole sends you an Illustrator file.

Finally, I would like to mention that I did hear from Adobe management directly about my concerns back in 2015. I do thank David McGavran, Director of Engineering for Adobe Pro Audio and Video, for contacting me by phone after one of my posts caught his attention. David was gracious, sincere, and relatively forthcoming. He even granted me access to their beta testing program, giving me the opportunity to preview and possibly influence features still in development. Sounds cool, right?! It was, actually, but my heart wasn’t in it. Premiere’s shoddiness had already wasted so much of my time that I wasn’t about to spend hours debugging new features. Plus, FCP X was gaining some respect by that time…and I was hearing intriguing things about the growing editing capabilities of a little color correction program known as DaVinci Resolve.

3 comments on “Premiere Pro is dead (to me). Long live DaVinci Resolve!”
Leave a Comment